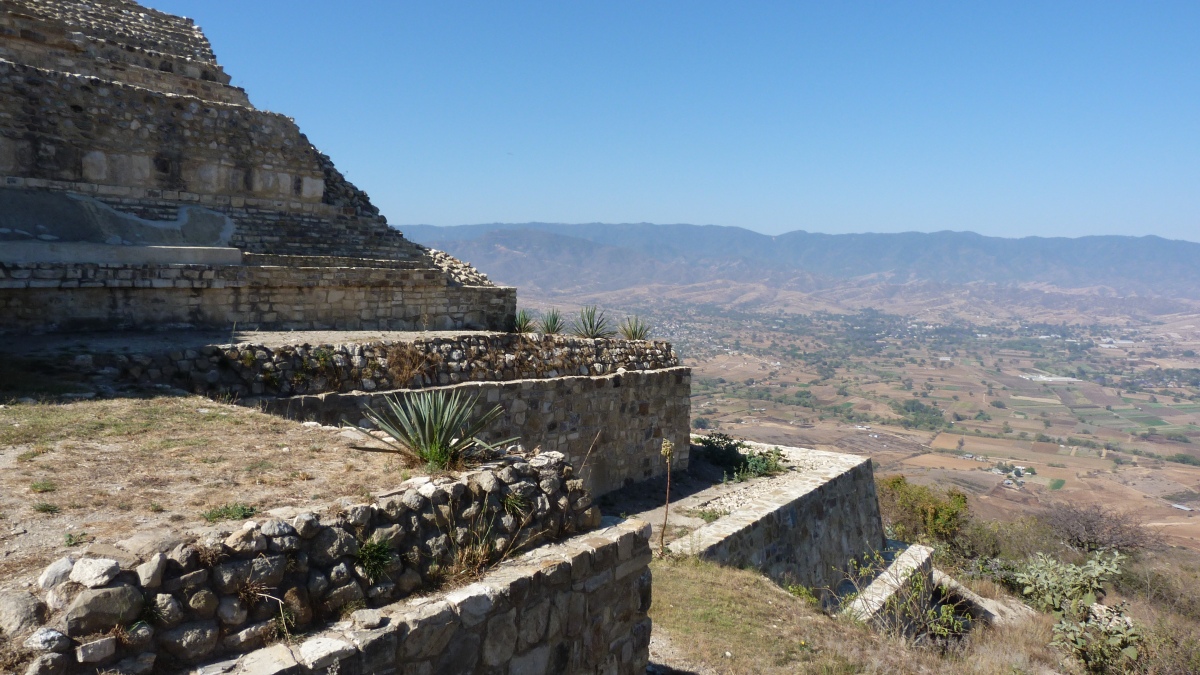 For more than a millennium, successive generations of Olmec, Zapotec and Mixtec peoples ruled the life of the Oaxacan valley from the city state of Monte Albán. Carved into a mountaintop 6400 feet above sea level, vast areas  were levelled in 300 BC for terraces and plazas. Temples and residences that allowed for seismic movement were built using layers of quarried stone and adobe. By 800 AD, 50,000 people lived in the city of Monte Albán. It was so large that suburban satellite neighbourhoods were built on surrounding mountaintops.

Monte Albán was declared a World Heritage Site by UNESCO in 1987.

When you are in Monte Albán, you feel as though you at the top of the world. There is nothing between you and the sky. The scale of the city is overwhelming. The central plaza is exactly oriented on the cardinal points (I checked with a compass), and so large that it dwarfs people as they cross. Stone staircases seem built for giants. It was built to impress.

My mother and I have been to Monte Albán before, and wanted to go again, but we wanted to start with a visit to Atzompa, one of Monte Albán’s satellite neighbourhoods.

The Atzompa archeological site has only been open to the public since the fall of 2012, and there is little information about visiting. New roads are being built to access it, but as yet there are few who travel there and it remains undiscovered by most tourists. So we hired a car and driver to take us to the top of the world.

We left early in the morning to avoid the heat of the day. Our driver Vincent took us out of Oaxaca, edging upwards through villages with dusty, winding streets. The “modern” village of Atzompa is known for its distinctive green pottery. About 90% of the villagers are involved in making pottery. It’s a traditional village and there is terrible poverty, but people are scraping by somehow.

There’s a small artisan’s market for intrepid tourists, but we passed by, and headed up the mountain. We passed a man with a burro, laden with something that looked like coal or maybe just rocks. We passed workers building the new road. Up and up Vincent drove, weaving past barriers, until he could drive no further. Mom and I set out on a newly created gravel stairs, leaving Vincent to wait in a newly built but vacant parking lot.

There is an entrance to the Atzompa archeological site, where we signed in. From the sheet I could see that there were 4 visitors yesterday, 18 the day before. Today, we have the place to ourselves.

The name Atzompa is Nahuatl meaning “at the headwaters”. It was built by Zapotecs from Monte Albán about 1200 years ago. After about 600 years of Zapotecs, it was inhabited by Mixtecs for over 600 years. The pottery making inhabitants of the contemporary village of Atzompa are descended from those Mixtecs.

Atzompa was built in a similar style to Monte Albán, although scaled down. There are small plazas, a temple, a tomb with funerary chambers, an artisan’s area, a stone quarry, and a large ball court.

From “Plaza C” you can see across to the city of Monte Albán, as well as to other, as yet uncovered, satellite neighbourhoods.

The plaza makes us understand the level of wealth and privilege in Atzompa. Residents looked down on the peasants, workers and farmers in the valley. They looked across to the seat of power, both political and religious. But it was also practical. Looking down, they could easily see movement or threats from other people travelling in and out of the valley. These were wealthy and powerful people, who lived in luxury.

The main square is 50 x 50 metres, bordered by a temple, with a central burial mound.

One of the two residences, the House of Altars, has a sunken patio surrounded by a sidewalk, and 18 rooms accessed by four different staircases. Servant’s quarters were attached by walkways. A desirable house, in prime location.

The ball court, one of the largest in Meso America, is 5 x 22 metres in an “I” shape, with a north/south orientation and long benches for spectators on either side. Ball games had both religious and political ramifications, and were “practiced to influence the movement of the stars in the sky, the continuation of the existence of the cosmos, and thereby, the continuation of life” (so the signage at Atzompa tells us). It is easy to imagine, as we stand so close to the sky, the power and influence of the games.

There’s a kiln and ceramic studio here. The original building hasn’t been excavated, as it sits 2.5 metres under the surface, but a re-creation gives weight to the importance of the studio, which specialized in large cooking pots. As today, each artisanal home is responsible for one type of pottery whether it be pitchers, griddles, casseroles or toys. I think back to the potters we passed on our way here. Tradition goes a long way back in this part of the world.

A burial chamber was unearthed in July, 2012. Not open to the public, it’s been dated to be 1100 years old, apparently in amazing condition, and unique in its design of three layers of tombs above ground and brightly painted murals on the walls. A wooden structure sits incongruously on the top, replacing the original stucco temple. The restoration is clearly still in progress, but the only work we see being done today is by men slowly raking stones on the plaza.

The mid morning sun is beginning to bake us. We gingerly make our way down the gravel paths, to find Vincent waiting patiently. We reluctantly leave the peace of Atzompa. Monte Albán, filled with tourists and school groups, beckons to us across the valley. Aztompa has become our shared secret, our own private discovery. Monte Albán is, as it should be, filled with the trappings of civilization.  We head there for desayuno (breakfast) in a lovely outdoor café …

AMANDA WEST LEWIS has built a life filled with words on the page and on the stage, combining careers as a writer, theatre director and calligrapher. Her book, The Pact, (Red Deer Press) was released in the fall of 2016. It has been listed on the 2017 USBBY OUTSTANDING INTERNATIONAL BOOKS LIST; selected for the 2017 ILA YOUNG ADULTS’ READERS CHOICES LIST; Nominated for 2017 SNOW WILLOW AWARD; and listed in the CANADIAN CHILDREN’S BOOK CENTRE BEST BOOKS FOR KIDS & TEENS, Spring 2017. SEPTEMBER 17: A NOVEL was nominated for the Silver Birch Award, the Red Cedar Award, and the Violet Downie IODE Award. Amanda has an MFA in Creative Writing for Children and Young Adults from Vermont College of Fine Arts. In her theatre career, Amanda is the founder of The Ottawa Children’s Theatre, where she teaches and directs children. She has developed specialized drama and literacy programs for youth at risk, and for children with autism spectrum disorder. She has a Certificate in Theatre for Young Audiences with Complex Difficulties from Rose Bruford College, England. In 2015, Amanda co-produced the hit play “Up to Low” is based on the book by Brian Doyle. As a professional calligrapher and book artist, Amanda is passionate about the history of writing and has taught calligraphy courses to students of all ages. She studied with Hermann Zapf, Mark Van Stone and Nancy Culmone among many others. Amanda lives with her husband, writer Tim Wynne-Jones, in the woods in Eastern Ontario. They have three wonderful grown children. Find out more on her website at http://www.amandawestlewis.com/ View all posts by Amanda West Lewis

4 thoughts on “Oaxacan Diary 2: Travels with my mother at the top of the world”

This site uses Akismet to reduce spam. Learn how your comment data is processed.