“September 17: A novel” has just been published by Red Deer Press. It’s my first novel, and I’ve had been doing launches and readings in Toronto, Kingston and Ottawa.

The book is based on true events. I came across the story when I was at an exhibit called The Children’s War in the Imperial War Museum in London, during the fall of 2011. In the exhibit, I saw a photo from 1940 of a group of young boys, about 10 years old, with huge grins on their faces. They were wearing oversized sailor’s hats and waving from the deck of a ship.

I think the caption might have read “Children Back from the Dead.” It went on to explain that the boys had been in a lifeboat for 8 days, after their evacuation ship, the SS City of Benares, was torpedoed by a German U-boat in the middle of the Atlantic. I looked again at their faces, at their smiles. I was hooked. I started to read everything I could about these boys and the terrible fate of the SS City of Benares.

I spent many happy hours in the archives of the Imperial War Museum, where there are audiotapes of some of these boys and other survivors. As I listened to their accounts, and as I learned more about the 100 children who were aboard the City of Benares, I knew I needed to tell their story. More than that, I wanted to get as close to them as I could so that I could tell the story from their point of view.

In March of 2012, Tim and I stayed in Salcombe, Devon. We found a perfect cottage by the sea and spent a blissful month writing, walking and immersing ourselves in town life. The photo at the top of this blog site shows the view from my writing desk. It was at that desk that I began the first draft of the book. If you look at the picture closely, you’ll see the book on the desk is “Miracles on the Water” a great resource book about the City of Benares by Tom Nagorski.

As I wrote I realized I wanted to try to capture the story from the children’s perspective. I thought that might be easier to bear, because they didn’t know how horrifying their situation was. For the longest time, the boys thought it was the best adventure in the world. Sitting in the lifeboat one of them asked: “Which would you rather be? Bombed in London or torpedoed in the Atlantic?” 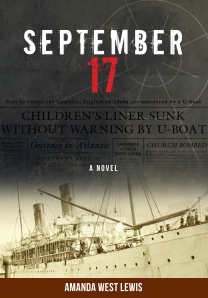 Writing the book is a tangible result of Stepping off the Treadmill. The book happened because I had stepped out of my regular life. I was somewhere else, open to new ideas, new people, new possibilities. It happened because I had the time to be curious, to do research and to fall in love with a group of children.

Now, I am able to share the story. I have been reading segments of the book aloud, and every reading reconnects me with the children. I’m reminded of their bravery, their humour, and their strength. But of course I can’t help but be aware of the enormity of the tragedy, and the loss of so many young lives.

An amazing coincidence happened when I went to Kingston with the book. John Lazarus, one of Canada’s foremost playwrights, came to the launch. He was excited that I had written a book about this almost forgotten piece of history. His uncle, who he is named after, was the deputy radio officer on the City of Benares. His uncle John went down with the ship as he tried to radio for help for the children.

A portion of the proceeds from the sale of September 17 goes to the charity Save the Children. Save the Children is the world’s leading independent organization for children, delivering programs and improving children’s lives in approximately 120 countries. Save the Children ensures that the health, education and rights of children are protected worldwide.   For more information visit www.savethechildren.ca

You can find out more about September 17: A Novel at http://www.amandawestlewis.com/#!september-17/cfbh

And of course I’m always happy to do readings…